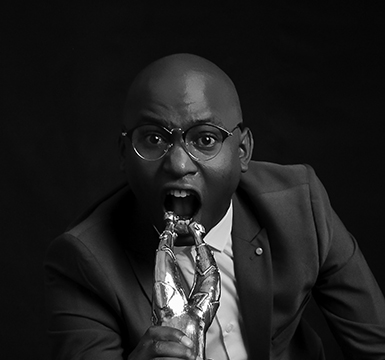 Durban Talents alumnus, Vusi Africa, has a unique and contemporary voice in storytelling, focused on the discovery of a hero with an African face. He honed his craft as a stage play writer and director, his work having been staged at some of the most prestigious venues and festivals including the National Arts Festival and The Festival of Fame. Vusi holds an Honours Degree in Motion Picture Production from Tshwane University of Technology, School of Motion Picture. As a film student, two of his films were selected for broadcast by Star Sat which broadcast across southern, east and sub-Saharan Africa. His debut Afrikaans short film, Die Kaal Kraal (2016) debuted at the Silicon Valley African Film Festival and went on to make its African premier at the African International Film Festival were it was nominated for best short film. Vusi debuted his feature, Letters of Hope in competition at the 40th Durban International Film Festival where it won the award for Artist Bravery. The film went on to open the 5th Edition of the South African International Film Festival where it was nominated for Best South African Feature Film, Best Screenplay and Best Supporting Actor. Vusi’s aesthetics as a story teller have earned him a place amongst the most coveted filmmakers to work with. In 2020 he was awarded with an honorary SAFTA for Best Emerging Filmmaker.